Posts › Why I chose the Pentax K10D
Cancel

Why I chose the Pentax K10D 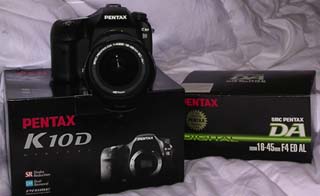 The last two points are important, because I live in the Vancouver area, where it is wet almost all the time, and cloudy obviously. I narrowed down my choices to three cameras (all 10MP): the Canon Digital Rebel XTi, the Nikon D80, and Sony A100. The Pentax K10D wasn’t even in the picture yet, until I saw the review at Popular Photography , DPReview and AnandTech [via the OK1000 Pentax Blog].

All of the cameras I mentioned are good cameras – but only the K10D balanced what I wanted in a SLR based on my profile above. Here are some of the features, plus my comments:

So there you have it. I chose the Pentax K10D more for its pluses instead of the other cameras’ minuses. If it wasn’t for the K10D, I would have picked up a Nikon D80 instead. I picked up a K10D body, plus a DA 16-45mm F4 ED AL lens, at my local London Drugs (all the online stores out of province were out of stock). I’ve only had it a day or so, but I think I will need a faster, wider lens – the FA 50mm F1.4 for low-light photography. Also none of the current lenses for Pentax have weather sealing, I hear the ones that do come out in March 2007 (uh-oh, am I getting lens buying addiction or LBA???). Oh, I also took some test photos of my cats, using the K10D.

[Update] I ordered the FA 1.4 50MM prime Pentax lens from B&H, very nice piece of glass, I use this the most, very sharp and I get a few more stops more light compared to my F4 (about 8x more light!), perfect for low-light situations.

Share:
Older WSCF 0.6 for Visual Studio 2005
Newer Upgraded to WordPress 2.1 "Ella"
No data found for the given query.