Two days – that’s the number of days we missed the tsunami by. My wife and I were in Phuket from Dec 21st 2004 to Dec 24th 2004. She wanted to extend our vacation by at least a day, but I nixed that idea because not only was she coughing (and vomiting occassionally) badly, I myself was coming down with a fever and cough. We found out later that she had bronchitis (and I caught it too). I never thought I would ever think, how lucky for us to get bronchitis! If we had extended our stay for an extra day, maybe we would have extended it for another day also… who knows. The bronchitis cutting short our vacation was our second lucky break actually.

Two times lucky – our first lucky break was cancelling our initial plans to go to Phuket during the Christmas weekend! I suggested to her, to invite her cousin and hubby along for our getaway weekend also. We wanted to take advantage of the Christmas long weekend, but the cousin had only one day off left for the year, and could not get anymore time off. We then shifted our plans so that we went earlier during the week (although we wanted to take the Christmas weekend also, so we can spend more time together since I am in town only 12 days, instead of having to go through the inevitable invites to family functions during the holiday weekend).

The gravity of the tsunami didn’t hit us – friends had started to text message and call about our well-being, and I initially jokingly put off their concerns about our well-being (most didn’t know we came back on Christmas eve). That was until I saw the destruction and havoc on TV. My wife was crying for all the people that were dead, and also because of the realization about how lucky we were not to have experienced the horror of the tsunami.

We would have beared the brunt of it. Our hotel, Burasari Resort, was adjacent to the Holiday Inn at Patong Beach, the hardest hit beach on Phuket island. As you can see from the image to the right, the resort is not far from the beach (maybe 1 min walk). Our room was on the ground floor (it was a room with pool access straight from the balcony). I shudder to think what would have happened if we were in the room! More likely though, we would have been at sea on an excursion.

We went on several excursions during our stay, one was at Raya Island (Koh Racha Yai), an absolutely beautiful island, where most of the time we spent on Batok Bay, and also snorkeling around the other bays of the island. I fear for the tourists out on boats going to Raya Island on that fateful day. When the tsunami struck, most of them would be out snorkeling. Below is where Raya Island is:

We also went on the “James Bond Island 3-in-1 adventure”. We visited the location where they filmed parts of the James Bond movie “The Man With The Golden Gun”, which is on Koh Ping Gan (now famously known as, of course, James Bond Island). It was a fun longtail boat ride – but of course neither my wife nor I have seen the movie, so the island wasn’t that much of an attraction for us. We also went on a sea canoe ride through the limestone caves, which was very underwhelming (for me at least). The apparent highlight (at least for the Europeans) was seeing mudskippers in the mud! Sigh. What was more interesting was, our visit to Koh Pannyi for lunch.

Koh Pannyi is a floating sea village near James Bond Island. It is a “sea gypsy” village that was erected about 200 years ago by three Muslim families from Indonesia whom emigrated to Thailand but were not allowed to settle in the mainland because the Buddhist population there didn’t want any Muslims to settle there, thus they settled on the sea itself. Currently, the population of Koh Pannyi is 1200 people, and they have a mosque, health centre and primary school in the floating village. The men of the village earn their living mostly as sea canoe peddlers, and the women run the gift shops and restaurants of the village. The location of Koh Pannyi and Koh Ping Gan is northeast of Phuket, in Phang Nga Bay (see yellow circle): 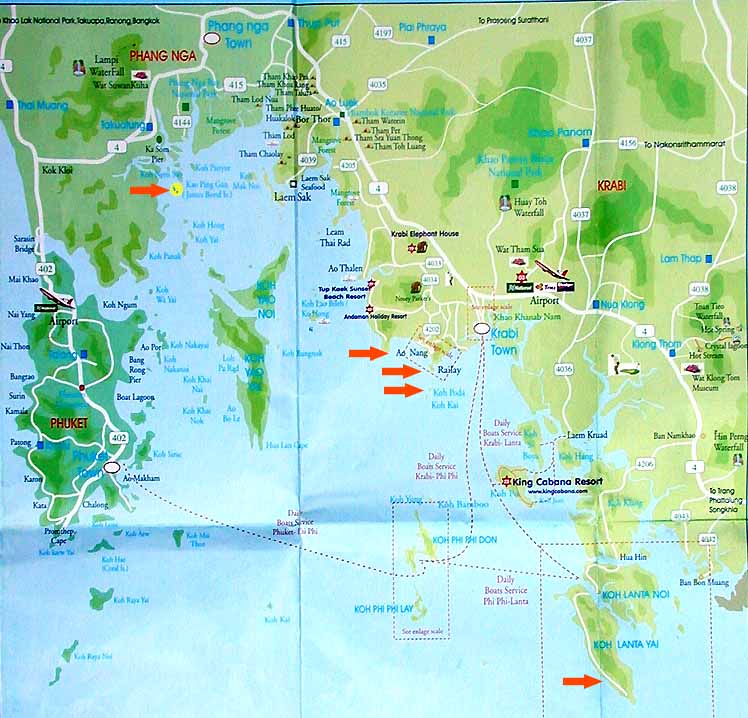 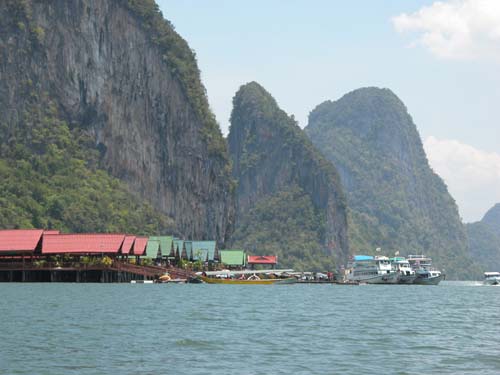 I hope the villagers did not experience the tsunami at all, I couldn’t find much news about whether the tsunami affected them. However, I found some news that gave me some hope, it appears they escaped unscathed: news story

After Koh Pannyi, we were brought back to Phang Nga province to go to the Elephant preserve, where my wife and I got to ride elephants and see a baby elephant show. I really enjoyed the elephant ride! The highlight of the whole day I thought. We dubbed our elephant “Juan Montoya” (of F1 Racing fame) because he liked to cut off all the other elephants. The baby elephant show was fun, although at some points I didn’t feel so good because I felt they were being exploited, and it was quite demeaning. But then without tourist money they can not survive – I felt conflicted about that. All I thought about was – imagine if a “superior” alien race made humans captive and made us do tricks to earn our keep.

That was the end of our excursions – right after that I got sick, and my wife wasn’t getting better either – and you know the rest of the story.

Phi Phi Island got hit quite bad by the tsunami also. My wife and I spent our honeymoon on Phi Phi Don Island (the northern Phi Phi island), at the Holiday Inn resort there, and we thought for sure it would have been wiped out by the tsunami. But reports on the Internet say that the resort escaped relatively unscathed, no doubt because of its northeasterly location (left image).

Thailand is a special place for us. Not only is it the place we spent our honeymoon in, we also celebrated our first wedding anniversary there (this trip was supposed to be our belated first wedding anniversary holiday). More so, it’s the Thai people that we have met and interacted with that we are concerned about. Tourism is their livelihood, and I can’t imagine how they are feeling right now – houses lost, relatives lost, livelihoods ruined. We will pray that they are safe. Our two Thai tour guides, “C” (easy to remember… A…B…“C”) and “King”, we hope you are safe, wherever you are!